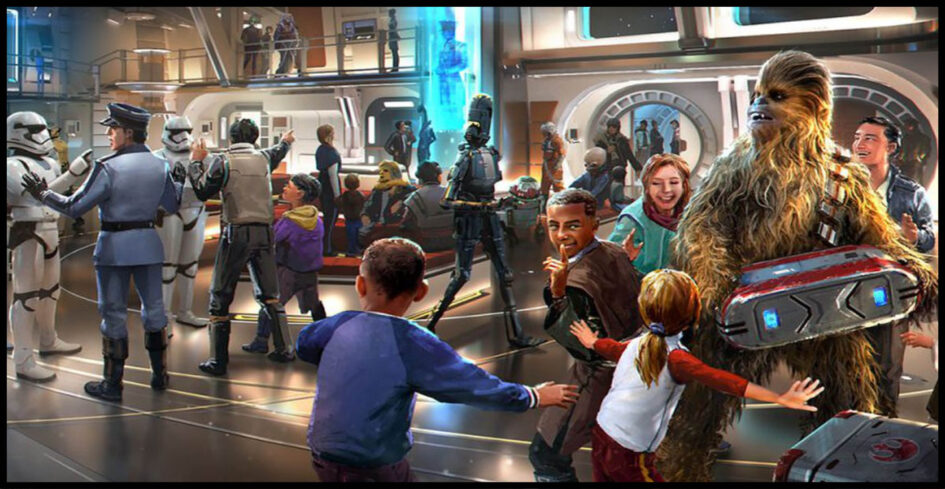 Whilst we can’t go very far from our homes at the moment, some recent US patent activity relating to Disney’s Star Wars Galactic Starcruiser hotel has allowed us to imagine a time when we will be able to take our holidays in a galaxy far, far away. In this article, Dawn Ellmore Employment reviews the patents that highlight some of the technology that will be used to create an immersive experience for visitors, and what it will mean for future holidays at the Galactic Starcruiser hotel.

What we already know about the Galactic Starcruiser hotel

Due to open in late 2021, the Galactic Starcruiser hotel is located close to the Star Wars: Galaxy’s Edge area of the Hollywood Studios theme park at Walt Disney World. Guests will be transported to the hotel from the terminal in a space simulation launchpad, and the hotel itself is shaped to resemble a spacecraft, named “The Halcyon”.

A stay in the hotel will include a chance to “visit” the Planet of Batuu with a simulated journey to the planet’s surface, and guests will be able to participate in a variety of Star Wars related activities such as receiving lightsaber training, visiting the Silver C Lounge, and taking control of the ship itself during a tour of the bridge and operations centre. 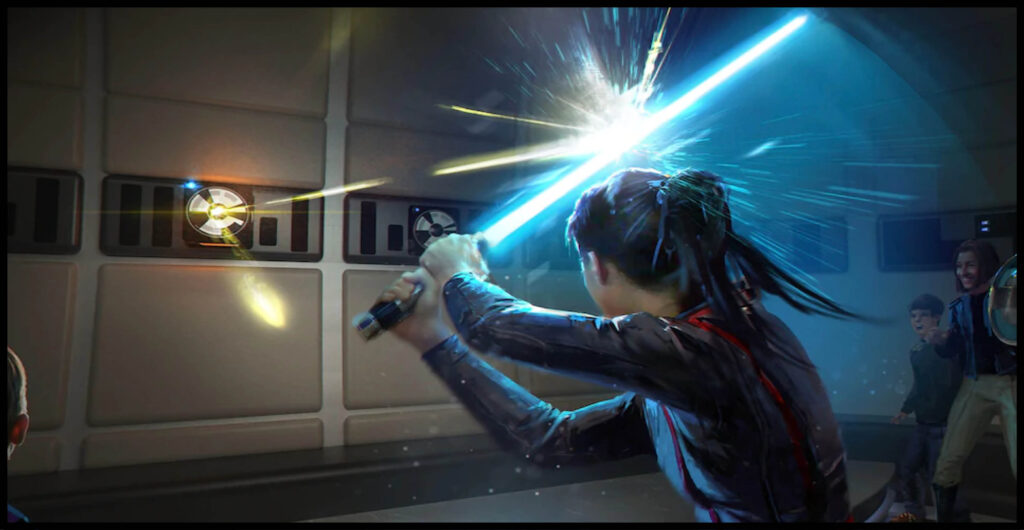 As you can imagine, in order to make these activities appear realistic and give guests the most convincing experience, a lot of new and futuristic technology will have to be employed. To this end the scientists at Disney have been busy working on such technology, some of which has recently been revealed through the publication of patent applications and the publishing of granted patents to Disney.

What the recent patent activity reveals

US 2021/0041710, a recently published US Patent Application, relates to “Image generation using a spinning display and blur screen,” and describes technology that will enable the generation of an apparently 3D floating image that corresponds to a 2D graphic and has no perceptible rotational blur. It is thought that this technology could be used to create hologram-type images that can interact with guests.

Recently granted US Patent no. 10,916,163 describes a “Large-scale infinity optics window for use in small facility packaging applications,” and the technology described provides for external observation ports in the Starcruiser which are synchronised to show a “live stream” of intergalactic space from different points throughout the hotel. It is planned that all 94 regular cabins and six “Captain’s Cabins” will include such a window to allow for simulated space views from all rooms. 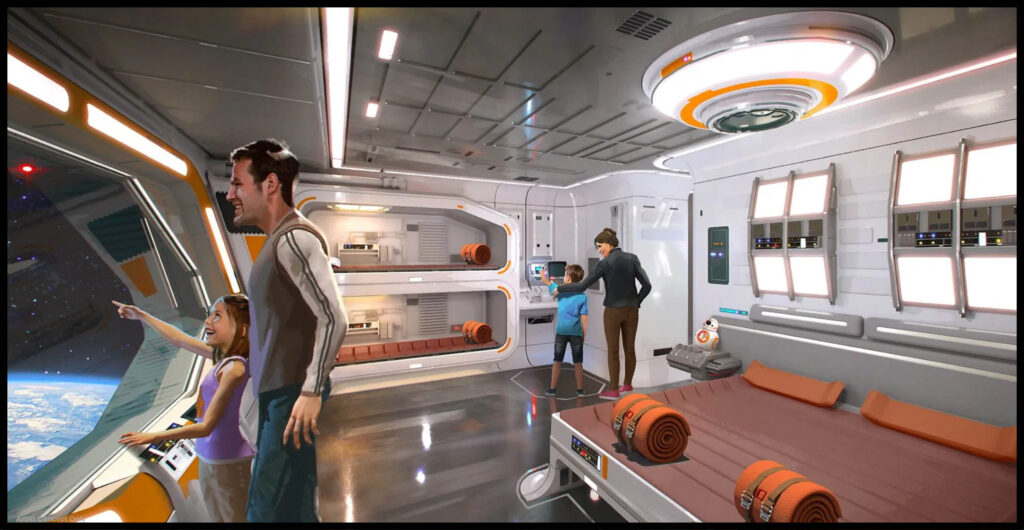 Published at the end of January 2021, US/20210027638 describes a “Themed aerial vehicle entertainment platform for providing dynamically-coordinated show”. Disney did create a drone show for the opening of the Star Wars: Galaxy’s Edge area, and it would seem that this patent takes that technology to the next level. It is speculated that technology described in this patent could be used to entertain guests on their initial journey to the Starcruiser hotel, and on their simulated visit to Batuu – for example to create X-wing fighters in a “live space” experience.

Whilst the computer-generated images of the hotel available so far give us some idea of what a stay would look like, we look forward to seeing all this technology coming together when the hotel opens later this year.