The Life and Innovations of Sir Clive Sinclair 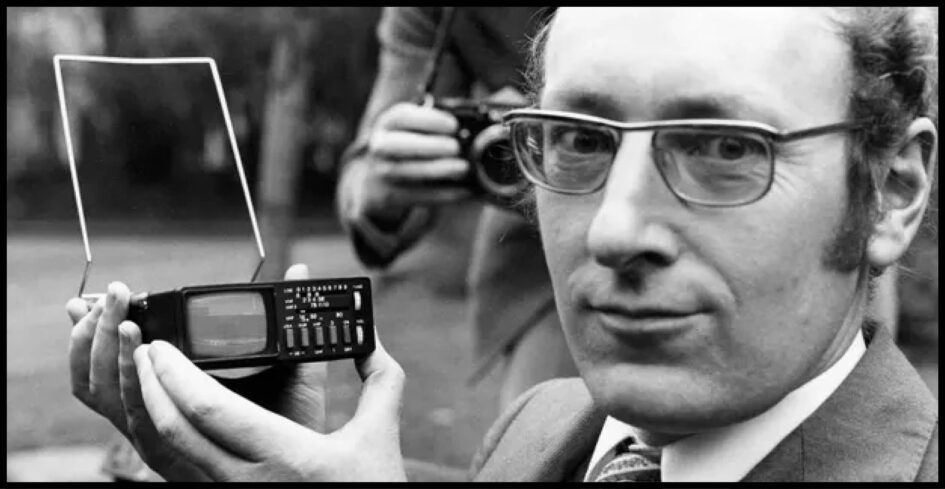 With the news of the recent passing of Sir Clive Sinclair, we take a look back at the life and innovations of a pioneering man who was in many ways ahead of his time, and was one of the founding fathers of the home computing boom in the UK in the early 1980s.

Clive Sinclair was born in 1940 to a family of engineers; both his father and grandfather worked in the shipbuilding industry, with his grandfather George being involved in the development of a mine sweeping device. Sinclair excelled in mathematics at school and took A-levels in pure maths, applied maths and physics. He did, however, not want to attend university and instead set up a small business supplying miniature electronics kits. He wrote his first article for “Practical Wireless” when he was still at school, and an insight into his later interests came whilst working a holiday job where he suggested the possibility of electrically powered personal vehicles.

A start in consumer electronics: the pocket calculator

Sinclair founded the company Sinclair Radionics in the early 1960s, which initially developed radios and other hi-fi equipment. By the early 1970s the company was finding success with a series of small calculators that were the first to be small and light enough to fit in a pocket – at the time, most existing calculators were the size of an old-fashioned shop till. 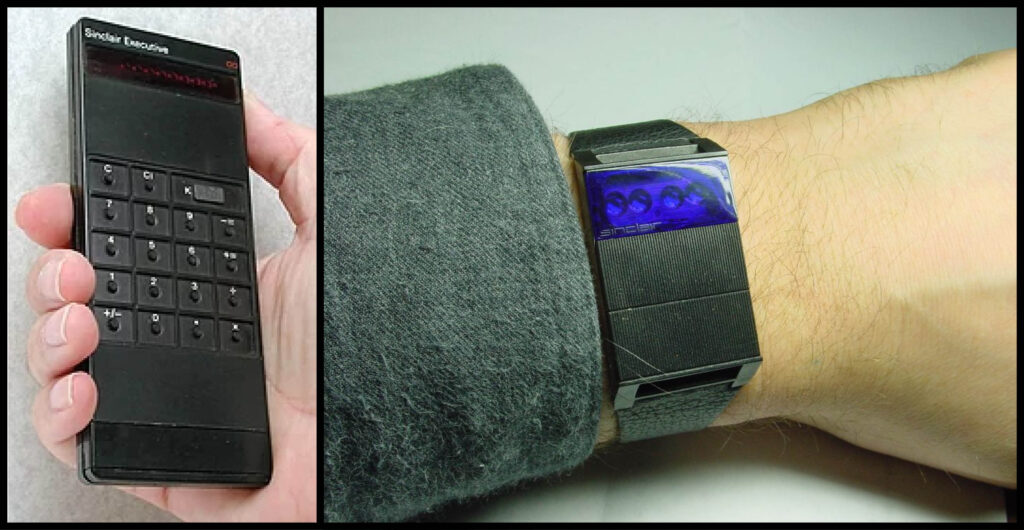 Sinclair Radionics continued to innovate throughout the 1970s, developing a number of consumer electronics products – in particular a digital wristwatch (the “Black Watch”) and a pocket-sized television (the “Microvision TV”). Although these products typically had many issues and little commercial success (the failure of the Black Watch would have bankrupted the company if the Government’s National Enterprise Board hadn’t provided support), they show just how far ahead of his time Sinclair was: 40 years later everyone would be wearing electronic watches and watching TV and other video content using pocket-sized devices.

Sinclair Research and the boom in home computing

Sinclair’s biggest commercial successes came in the early 1980s with the release of a series of affordable home computers: the first of these, the ZX80 released in 1980, retailed at approximately a fifth of the price of competing machines at the time. The ZX80 was followed a year later by the ZX81 and in 1982 by the ZX Spectrum 48K. Many notable figures in the gaming industry have credited the ZX machines with fostering their interest in computers and programming. The ZX Spectrum 48K was, as the name suggests, the first to offer a colour display and went on to become Britain’s best-selling microcomputer, as well as being credited with a pivotal role in the development of the British gaming industry. 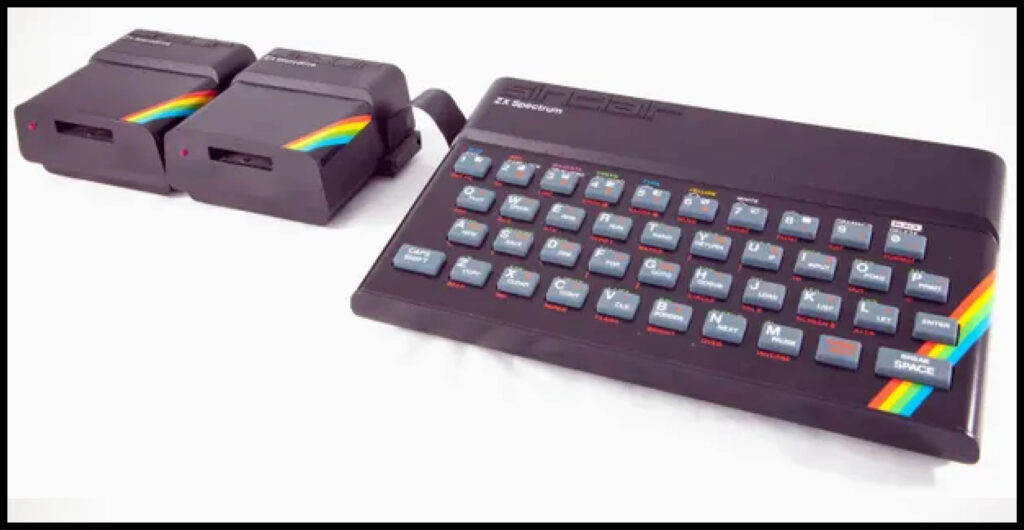 A less successful move towards innovative vehicles in the 1980s

As a result of the success of the Sinclair microcomputers, Clive Sinclair became a household name, leading to him being awarded a knighthood in 1983. However his name also became synonymous with less successful ventures, most notably in the field of personal vehicles.

The most instantly recognisable example of this is the Sinclair C5, a battery-powered electric trike that launched in 1985. Amongst the concerns with the C5 were safety (specifically, driving a vehicle below the sight line of other motorists), the price, overall appearance, battery power (users had to pedal the C5 up hills) and the fact that users are exposed to the elements. The poor reception of the C5 put a stop to the development of further electric vehicles and again this is an example of Sir Clive just being too far ahead of his time, with electric vehicles being all the rage in the modern world. 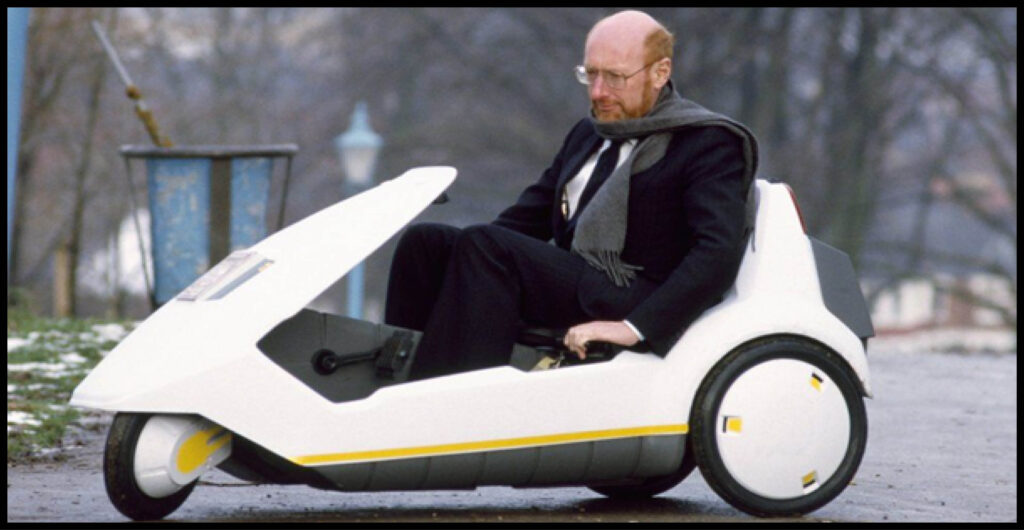 Despite the failure of the C5, Sir Clive continued his interest in innovative personal vehicles: he developed an electric foldable bicycle (the “Zike”) in 1992, and in 2006 he released a folding bicycle (the “A-bike”). The Zike was not successful – a fact that Sinclair himself put down to manufacturing difficulties, although reviews criticised its instability, small wheels and lack of power. As for the A-bike, despite some advantages (it was lightweight at 13kg and folded small enough to fit in a rucksack), critics focused on the flexibility of the frame, uncomfortable saddle, and small wheels which were said to be unsafe on uneven surfaces. Later models addressed these disadvantages, but commercial success continued to elude Sinclair. 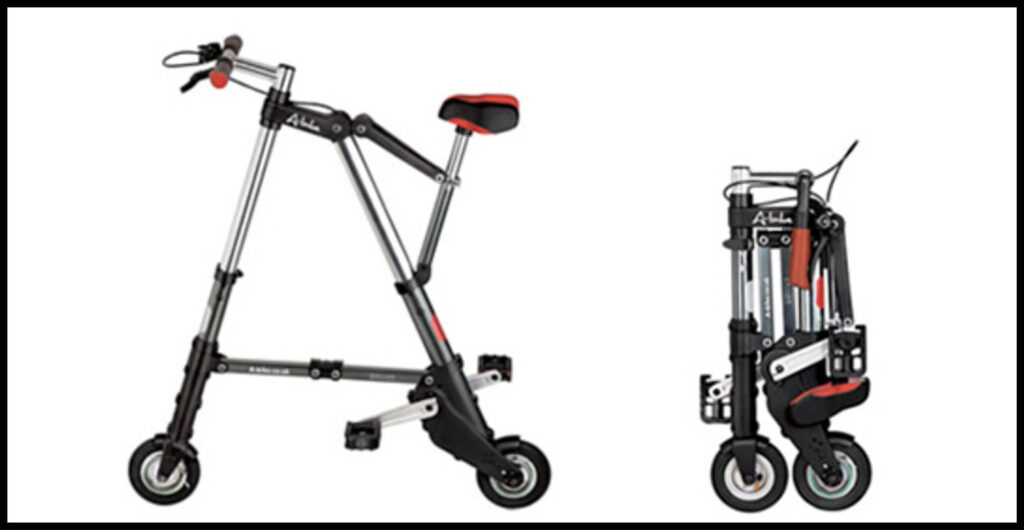 An innovator who was ahead of his time

In writing this article, we have come to realise just how pioneering and ahead of his time Sir Clive often was. In the modern world, we think nothing of a pocket calculator, an electronic watch, a folding bike, an electric bike (and even a folding electric bike!), or watching video on our pocket-sized mobile device, but it seems that the world often wasn’t ready for these innovations – or the technology required wasn’t yet up to speed – when Sir Clive first developed them.

Sinclair’s daughter Belinda summarised her father’s lack of commercial success, saying “I think sometimes he was a bit too early [with his inventions]. “He was very good at imagining things that people might like or might need, even though they didn’t know they wanted them.”