Microsoft’s latest patent for clues on a new device 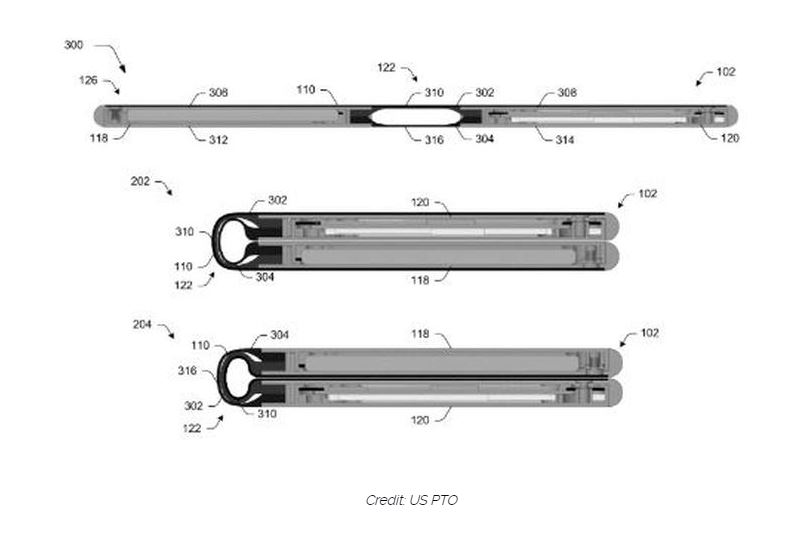 At Dawn Ellmore Employment, the team keeps an eye on major intellectual property (IP) news, whether that’s IP applications, refusals, legal cases, trade mark disputes or copyright battles. It’s always particularly fascinating to follow IP applications of companies, as it’s possible to get a glimpse into the potential future of every day devices.

Microsoft has always been an innovator, and the number of patents they register reveals tantalising clues as to the direction their technology is taking. Last year, they patented the much discussed ‘Andromeda’ project.

And if you’ve been waiting for updates on Andromeda, Microsoft’s foldable pocket sized two-screen device, you’re out of luck. The tech world has been buzzing with rumours about Microsoft’s top-secret device, but recent sources suggest it could be on hold indefinitely.

Apparently, Microsoft is planning to completely overhaul the hardware and software involved with the gadget, as it doesn’t fit the remit of the Surface brand yet. According to sources, Microsoft has iced the project due to quality and scheduling issues and are focusing more on cloud computing and AI.

However, the company is still developing multi-screening devices, according to a patent application published recently by the US Patent and Trademark Office. The patent describes a mobile computing device that has multiple screens and includes a processor and accelerometer.

It says that the device houses “two parts, the first part including a first camera and a first display device, and the second part including a second camera and a second display device.” The hinged device would support video calling for up to three people at the same time, so that two people can chat with a third person on the other end via video.

The patent goes on to say that each screen is designed to render the video from the respective embedded camera, the feed from the other screen’s camera or from the feed by the remote caller. This suggests that all three people talking could be shown together on each screen.

This multi-screen solution solves a problem that people are increasingly voicing frustration with. When multiple people are speaking to each other on group chat via a single screen device, it’s not possible to get everyone into the picture. Two cameras and two screens make this far simpler.

The device will include storage, system memory, sensors, a processor, “two or more display devices” and front-facing cameras. To illustrate use of the dual-screened device, Microsoft shows a person standing up while holding and talking into the device, while another person sits in a chair, chatting through the second screen on the device.

For those who were following the rumours surrounding the Andromeda project, the device sounds very similar. In fact, it could be that this patent is related to the former project, which was originally submitted as a patent in June 2017. The patent went live on 3 July 2017, and even if we never see the Andromeda device on the market, Microsoft will still have the rights to the design.

The technology industry will be waiting to see what becomes available on the market from Microsoft as they change the focus of their research and development towards artificial intelligence and cloud computing.

Follow our blog for updates on all things IP.